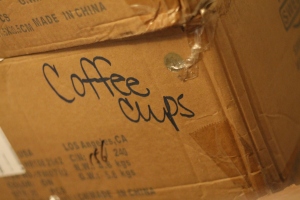 Haven’t been here in while, but I’ve started to miss it.  You’ll notice the new name: My Cottage Home.  It’s still a place where I might update on the life & times of our family, but the focus will be on our cottage home.  I’ve posted many of my projects and designs here over the years, but now I hope to make DIY projects for the home the personality of the blog.

After sixteen years in our sweet 100-plus year old home, we are on the move.  With one kid in college and the others at 15 and 12, we don’t need as much house anymore. We want to simplify.  It feels good. We have purchased the home that I spent many years of my life in.  My parents built the house when I was in high school and now my family will make our home there. My old bedroom will be my daughter’s.  Love. 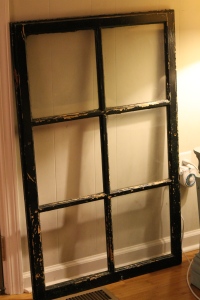 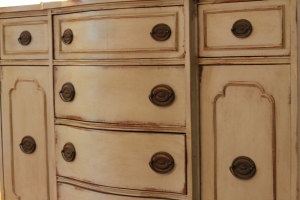 Love, but want to ma 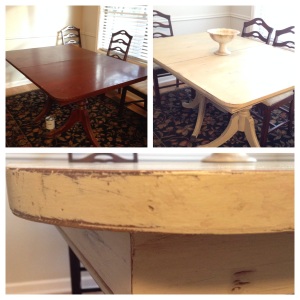 ke it our home.  They have been so good to this house.  Built it, remodeled it, and cared so well for it.  I’m just going to put our stamp on it.  I love stories.  I have a degree in English and love history.  Every home tells a story and the pieces in it should reflect that narrative.  I treasure what has age, patina, and is a little rough around the edges (with a little new & shiny thrown in for good measure). My great grandmother’s buffet and table revived with Annie Sloan Chalk Paint, or an old window that may have once framed a view of white shirts drying on a backyard clothesline. I want my home to tell a story of purpose.  Of place.  Of comfort and coziness.

To be honest, it feels a bit trivial to do another blog about home makeover ideas.  I know they are a dime a dozen.  But with all the noise, chaos, and sadness in the world, home is sacred. It’s the place I meet the needs of my family. Where we laugh, break bread, argue, cry, rest, regroup.  It’s where we are most real.  My projects won’t be rocket science and my vision won’t be ground breaking, but I’d love to have you visit. You’re always welcome. 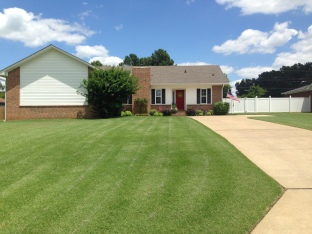 It’s Christmas time again. You know, the “most wonderful time of the year,” as the song goes. We celebrate the birth of our Savior. We sing songs, give gifts, throw parties, bake cookies, trim the tree, hang lights. It’s all beautiful. It’s joyful. And it’s painful.

I was driving home the other night from the hospice facility where my father-in-law is receiving care during the late stages of cancer. I passed house after house strung with bright lights. Holiday tunes played on the radio. I couldn’t help but be struck with the irony of it all. It’s not the most wonderful time of the year for my family watching my husband’s dad suffer. Every year we think about one of our daughters who isn’t here for us to shower with gifts. One of our dear friends, a young mother of four children including a newborn, this week received the second cancer diagnosis of her 30-year life. Another friend, mother of three and my age, facing cancer.  Today a news alert on my phone reported the most horrific school shooting our nation has ever seen – so many children slain.

The most wonderful time of the year? How could it be? Because it’s for this that Christ came. The truth of the gospel is joy in pain. Christ came and “for the joy set before him endured the cross.” (Hebrews 12:2) I don’t understand it. I don’t really like it – I’ve had plenty of suffering to last me. But Christmas is joy. The advent of the savior who would go to the cross and face every sin that mankind has, is, or ever will commit. So the truth is that the suffering I have here will be eclipsed by the glory that is to come. The heaviness of the pain on this earth will be crushed by the weight of the glory that awaits the believer (2 Cor. 4:17).

This is my only hope. And I can rejoice! We put up a tree. We bought gifts, and we’ve baked cookies. Not without pain, to be sure. But inherent in our pain is joy. Joy in that child that was born to an obscure little couple in a hillside animal cave. Joy that he lived perfectly. Joy that he suffered the most heinous death known to man. Joy that he rose again to conquer the grave. Joy that he will return and all this pain will be swallowed up in victory.

Last week, I saw the gospel. I didn’t hear it – I saw it. It was not in a church, or on a mission trip, or at vacation bible school. It was in a sleepy little town in the Arkansas Delta in a time-worn courthouse whose walls could’ve told countless tales had they been able to speak.

As we waited in the courtroom for other court proceedings to be completed, the 10-month old snacked on crackers, played with toys, drank from his sippy cup; completely oblivious to the fact that his very future hinged on the decision that would be handed down in mere moments.

Our friends raised their right hands and swore to truthfully testify before the judge. They were asked by the attorneys, “Are you fully aware of the circumstances surrounding this child’s birth and why he was placed in the foster care system?” “Is it your intention to raise this child as your own; with all of the positives and negatives that go along with it?” To all of these they answered an unwavering and unhesitating “yes.” They had decided long before this day that he would be theirs.

For the past three years, our friends had been burdened with the desire for another child – one that they would not biologically parent, but one who would be grafted into their family as though he shared their DNA. During the marathon of interviews, home studies, paperwork, social workers, more interviews, classes, and frustration with the glacial pace of the system, they clung to the certainty that God had led them to this place – brought this child to them.

As I witnessed this legal proceeding making this little baby boy an “official” member of this family, I couldn’t help but see the gospel. He was far away from a stable, loving family at birth. He had no real family. He needed someone to take him in; to give him what he could not give himself. He needed a home.

Finally, the judge granted the petition to adopt and change this little guy’s name. The name he was given at birth was no more. That was no longer his identity. He was now his father’s son.

My camera was clicking away at all the smiling, tearful faces, but I couldn’t help but thinking to myself that this is who I was – who all believers were. Lost and without a home – orphans – until Christ our advocate said to God, the judge, “This one’s mine. I redeem her. She is now my child and receives every right and privilege of my daughter.”

I also felt a painfully convicting feeling. “Why don’t I live like God sees me?” I thought. Why do I fret constantly over perfection, others’ acceptance of me, and whether or not I measure up? As my father who has adopted me into his family through Christ, He rejoices over me. I’ll admit I rarely think about him in this way and rarely live like it.

I want to live like this sweet, precious little child. I have been taken in, given a new name, loved unconditionally – died for. That’s something to celebrate. It’s time I started. 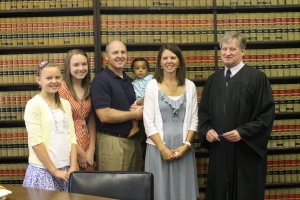 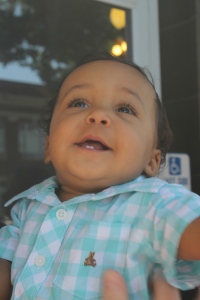 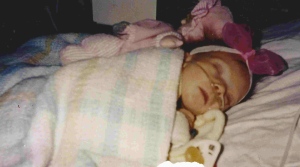 She’d be 14 today. It would be time for a driver’s permit. There’d be makeup, clothes, texting her friends. Would she be a girly-girl or be a tad-bit tomboy? Quiet? Shy? Outgoing? Would she be a bookworm or an artist? Writer or actress? Would she enjoy coffee dates with me or going running with her dad?

As more time passes, my heart, though healed, still hurts so much. As her siblings grow into such amazing people, I ache over what will never be for her – or us. At least not here.

This year has been difficult. My pain has been closer to the surface, and it’s tough to say exactly why. Yes, they say time heals all wounds, but I’m not sure I believe that. Time does not heal all scars. In many ways, the scar in my life left by sweet Abby’s absence becomes more prominent as the permanence of life without her really sets in.

The loss of a child is unlike anything else. We’ve even had people say, “Well, aren’t you glad you have other children?” To which I want to reply, (but thankfully haven’t), “Sure. Let’s cut off your right arm. Aren’t you glad you have another one?” Of course I’m grateful that God saw fit to give us more children, but none of our other kids take her place. None of them fill the spot reserved for her in our hearts. Every family picture is missing someone. She was here. She was real. She is gone.

Although some moments can still get pretty dark, it’s not often entire days or weeks anymore. We laugh. We have fun. We experience lots of joy. Then her name comes up, or we turn and see her picture, or we see a girl her age. There’s a twinge of pain at that moment. We feel the scar the wound has left.

Our only hope in all these years has been this: Christ has died. Christ has risen. Christ will come again. Throughout history, believers have clung to this truth in the suffering and pain of life. This won’t last forever. We won’t hurt forever. We will be together forever. Because of Christ. I believe this.

When He comes again, all the pain will be gone. All the tears wiped away. Only joy. Only peace. No more wounds. And the only scars will be His.

Robbie & I celebrated 20 years of marriage on July 26.  It’s so hard to believe it’s been that long.  We were just babies when we married, and we’ve experienced many joys and pains over these years.  It’s been a wonderful journey so far – love the life we’ve made together.

To celebrate, we traveled to San Francisco and the Napa Valley in October.  It was so beautiful and we had so much fun! I’ve posted many pics: (to view larger images, click on first one and view one at a time).

After the Christmas tree came down, I was in the rearranging mood.  My living room isn’t a very cooperative shape, so I had to be creative.  I did, however, find a “new” coffee table at a local second had store.  A little paint, and it’s reborn! I spray painted the wood and did the glass with a technique that makes it look like the old, mottled, mercury glass.  You can see how to do that here.  I’m pretty pleased.

About three years ago I painted over a huge picture I’d had for some time.  I used chalkboard paint and wrote on it one of my favorite quotes.  This weekend it got a new coat of paint, but I had to keep the great quote, “There is nothing like staying at home for real comfort.”  ~Jane Austen

But around here, we celebrate that everyday… 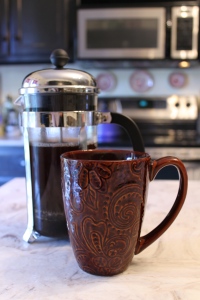 Made this for lunch the other day.  So good & so easy when you use prepared pesto and frozen peas.  Yum! 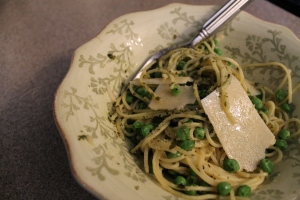